“Every single dollar that people donate, I’m giving right back out to nonprofits that we care about.”

A passion for pizza-making, a little ingenuity, and a desire to give back led Ben Berman, WG’21 to create Good Pizza PHL — a pizza shop that donates all profits to local charities.

Good Pizza doesn’t have a storefront or fixed hours. Ben runs the entire operation from his Center City apartment where he bakes about 20 pies on any given night. In order to snag one of the limited number of pies, “customers” must sign up for an email newsletter and place orders online. The finished pies are safely lowered out of the second-floor window via a cardboard box and rope pulley system.

Good Pizza was humming along making “pizza drops” but on November 20, a positive “One Bite Pizza Review” from Dave Portnoy of Barstool Sports sent them to new heights. In the first 24 hours, Good Pizza’s Instagram account attracted more than 10,000 new followers and donations from around the world flooded in.

We caught up with Ben to get the backstory on how Good Pizza came to be, what he’s learned from the experience, and how the Wharton community has supported the mission from day one.

Tell me more about how you decided to start giving away pizza for free from your apartment window, raising money for charity and then specifically, the idea for the “pizza drop” is pretty innovative, I haven’t seen anyone do that.

Yeah, so there are really two pieces to it. The first is, I was just traveling all the time before [Wharton] – 140 nights a year in a hotel. One of the things I really missed about that was cooking. When I got to school, one of the things that I was looking forward to doing was just cooking more and having friends over for dinner. Starting last September, when I first got to school, I started cooking more and got into pizza. I was testing out dough recipes in my apartment and started to buy equipment. For about a year and a half now, I’ve been pretty consistently having friends over almost once a week for pizza and just making them test and try different recipes.

Then when the pandemic started in March I actually had made pizza to have some friends over and it became clear that we probably shouldn’t gather for a pizza night. But I had these 10 pizzas that I needed to give away somehow or else I’d be eating them myself.

And so I texted a bunch of friends that I was going to have over and because I live on the second floor of this apartment building, I can drop them out of the window. The original “Pizza Drop” was a paper plate inside of a plastic bag from DiBruno Brothers, on a long string and I just lowered it out the window.

People thought it was really cool. So I was like, alright well that’s interesting that there’s something here. As things got more dire over the summer and I wanted to find a way to give back. It was just an opportunity to marry those two things and instead of people [asking], “can we send you $10 for the pizza I’ll bring you a bottle of wine?” The thought was, I can either give $100 on my own to nonprofits that I care about or I can spend $100 on pizza ingredients. I can make pizza for 20 people and I can not only make them smile by giving them some pizza that I think is pretty good, but I hopefully can bring in $500 and amplify the impact of the dollars that I was going to give in the first place. That was the original intent of Good Pizza.

What has it been like to watch Good Pizza grow from this idea among your friends?

It’s been fantastic. What’s been the coolest thing about it has been to see the positive response across the board. I just didn’t expect so many people to reach out from around the world, frankly, and just say, “Hey, we saw you on YouTube, we saw you on Instagram. We think it’s so cool you’re doing. We can’t come to try your pizza but here’s $10 or here’s $20”, or all the way up to $150 from people who will likely never have the chance to actually try the pizza.

People are reaching out to say: “people need this right now, thanks for bringing a little bit of kindness to our lives. I wish more of the internet was like this.” That’s been the coolest part for me. I’ll take all the pizza compliments, I’ll never turn those away and I love to hear people are enjoying the pizza. But the best part for me has just been to see that it’s making people smile, just to see it from afar and that they’re saying, “I’ve been making pizza, I think I’m gonna try to give some away this weekend and see if I can bring in some dollars on my own” and that’s been, that’s the coolest part for me.

Do you have some of the specifics on the growth over the past five days or so in terms of followers and also in terms of how much money you’ve raised for charity?

I gained about 12,500 followers since Friday afternoon on Instagram. We’ve raised $7,800 and Barstool [Sports] made a donation of $7,200 on Monday so we just had our $15,000 mark this week. Every single penny that comes in, I give away. I don’t take any cut myself, I’m not using it to pay for ingredients. Every single dollar that people donate, I’m giving right back out to nonprofits that we care about. Right now, we’re giving to Philabundance to fight hunger in the Philadelphia area and also Project HOME, which is an amazing nonprofit working to end the cycle of homelessness in the Philadelphia area.

How did you go about choosing the nonprofits and have you heard from them at all?

There’s a bit of art, a bit of science, and as I said, I have a pretty extensive nonprofit background. I actually had a chance to work a couple of times for a venture philanthropy firm in Boston called New Profit that I love, and they really exposed me to the work to choose where to invest nonprofit dollars, and they have a really innovative model for how they do that. So, I had a sense of what I was looking for and I wanted to do some direct impact work in the Philadelphia area, especially after the review came out I felt like we had a good presence in the Philly area. I had my eye on these two organizations for a while as well as a bunch of others that had reached out. I did a poll on Instagram and asked people who they thought we should give to and I wanted to engage the community a little bit and so, so many people brought up these two organizations over and over again.

That’s sort of how we made the decision. I’ve spoken to them both now and they’re just wonderful people. I love what they’re doing, and we’re going to see if we can support them, as well as some other organizations, in the future as we continue to grow Good Pizza.

How have your Wharton classmates have supported the project, either as customers or by spreading the word?

Oh, tons. First of all, my classmates were the first test subjects for the last year. I think they’ve had more pizza than they’d like to admit. They’ve been good friends and they’ve put up with the good and the bad as we’ve gotten to where we are. So, I have to thank my close friends a ton just for being there for me and being supportive of the idea.

I’d always heard about the idea of startups starting at Wharton and I certainly don’t think of Good Pizza that way, but I have been able to see the strength of the community just in the support that I get from my classmates and the encouragement that I’m getting to continue to grow something like this.

Have you been able to draw parallels or apply any concepts from your courses? What have you learned about business from this experience?

I think a lot about how my classes have taught me how to find a place in the market, to innovate, and to grow something from the ground up. And, I’m not dealing with deep [profits and losses] here, or anything like that, but there is an essence to it — how do we identify what the landscape looks like and how do we grow something that people will respond positively to? That’s been a cool chance to reflect on classes in a nonprofit format.

I’ve had so many local businesses reach out to support me in some way. I didn’t expect local pizzerias to shoot me a message and say “Hey if you want to come use our space to make your dough,” or “if you want to come in and make pizzas in our oven one afternoon when maybe we’re closed. We’d love to support you in some way.” So, if anything, this whole experience has made me slightly more optimistic about business and the willingness of folks to support others like them. And that’s been great to see.

What are your future plans, both on the pizza side and in terms of what you came to Wharton for, and has this changed your outlook in any way?

I’m heading back to consulting after school. I came in as a sponsored student and I liked working at my firm before school and I’m excited to go back and do more of that work. But, Good Pizza has been an incredible experience so far and if I continue to grow this and continue to spread the word, raise some dollars, encourage people to do things like this on their own in their hometowns and just see where this goes, I’m happy to ride this out as long as I possibly can. I’m just thankful for all the support that folks have given me, the opportunity to tell my story and I’m excited to see what happens with it. 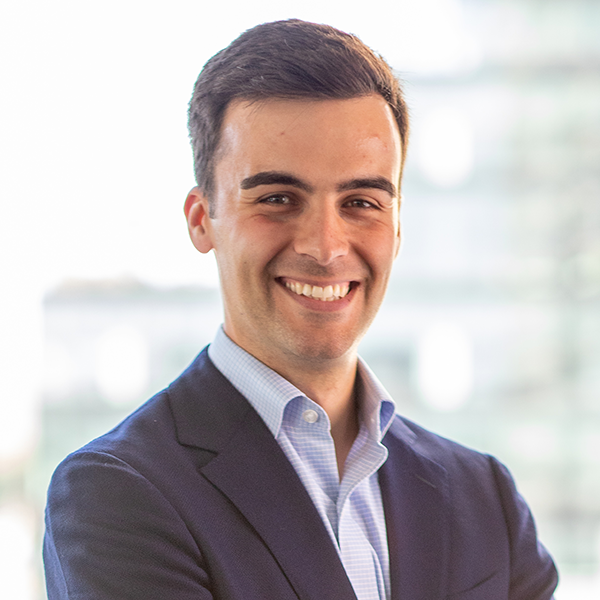 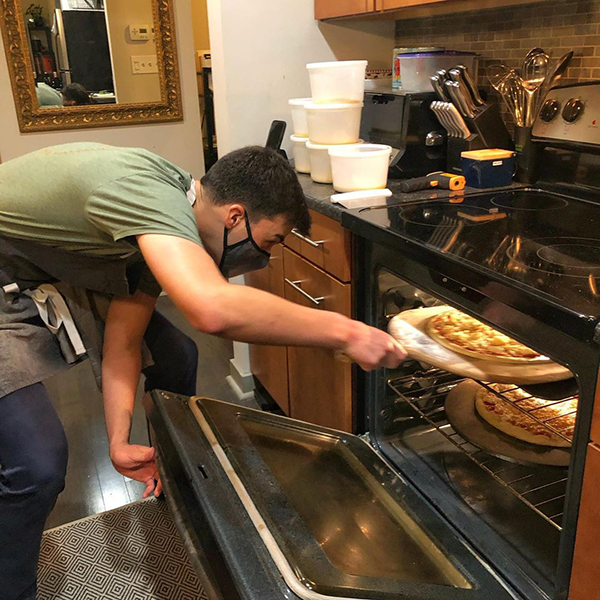 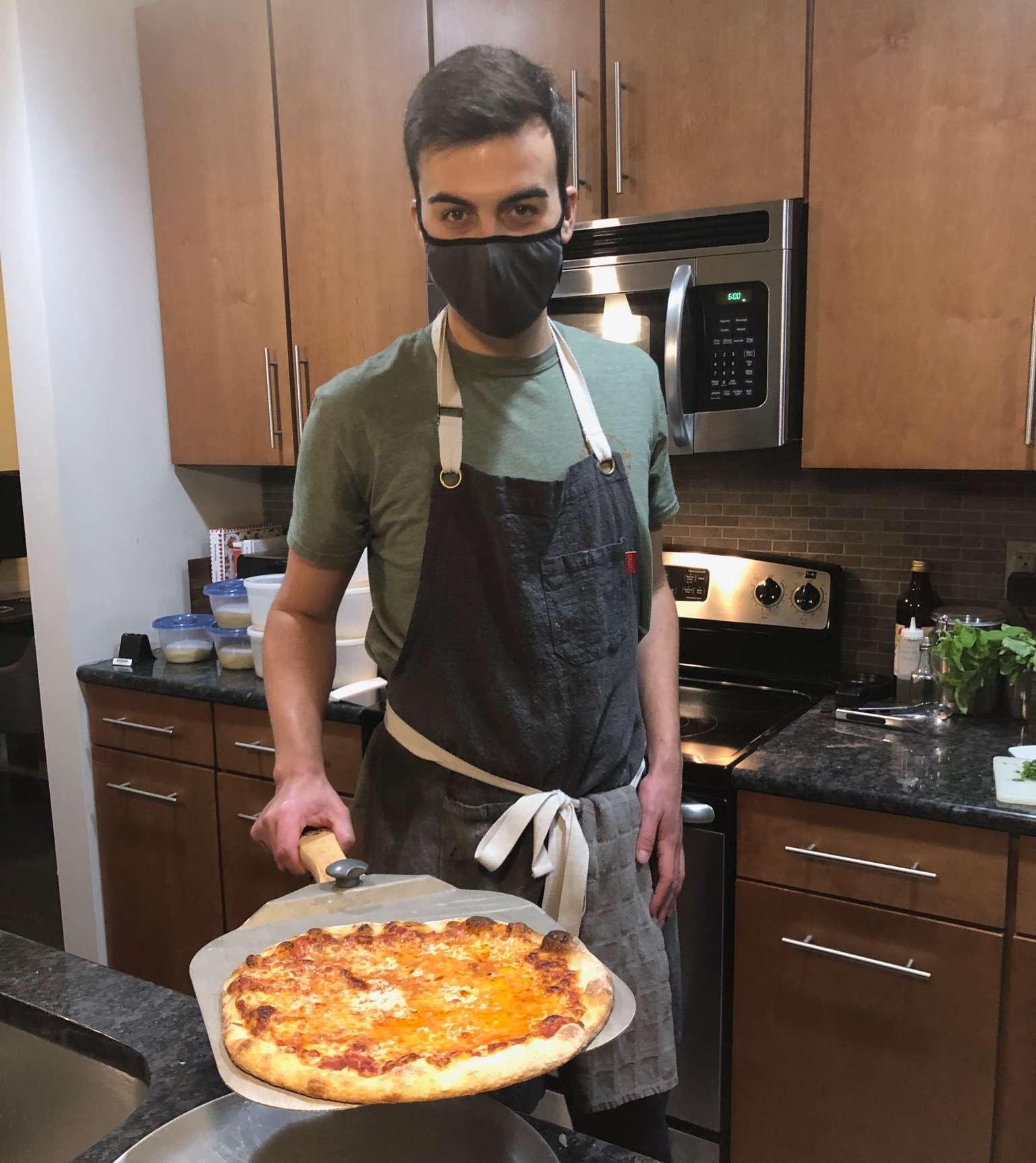 Ben Berman, a second-year MBA student, pulls another Good Pizza from the oven.